Hairballs in Cats: Causes and Symptoms

Perhaps one of the biggest drawbacks of owning a long or medium-haired cat is their impressive ability to produce ‘hairballs’, clumps of undigested fur and slime which are also known as ‘trichobezoars’ by those in the know. Cats sometimes like to wait for the most awkward moments, such as when guests are over and there is a lull in conversation, to start hacking away loudly in the corner! Not only is this a little embarrassing, it is surely unpleasant for poor Felix too.

Most of the time, when a cat produces a hairball they will retch and gag for a few short seconds but are completely normal before and after the event. They will often turn around to you afterwards, seeming to ask ‘Why are you staring at me? Get over it, it was just a hairball!’. They do not tend to feel particularly nauseous or unwell and should still have a healthy appetite for the rest of the day. Many cats will develop a pattern, throwing up a hairball after eating some cat grass or after finishing a meal.

Despite the name, hairballs are rarely in the shape of balls and are more typically ‘tubular’, taking on the shape of the food pipe in which they have recently passed through. Cats can be quite secretive when it comes to producing hairballs and we are not always ‘lucky’ enough to witness the event. How many of us find an old hairball when cleaning up the house; congealed and stinky, hidden underneath the sofa? These little hairballs are incredibly unpleasant and can often stain flooring and carpets.

Of course, the main concern with hairballs is not the decorative damage they do, but the potential health implications that they can pose. Hairballs are not the seemingly innocent balls of fur some think of them as and can actually be potentially very dangerous to some cats.

While the majority of hairballs will be dealt with without issue, it is possible for these clumps of fur to not pass through the system and get ‘stuck’. While they are usually vomited up or passed out the other end in fecal matter, some stubborn fur balls may decide to linger within. Over time, more and more fur will accumulate and bind to the initial ball and a cat can develop an intestinal blockage.

These blockages can be full or partial, so a cat may have symptoms that come and go (as is the case with a partial obstruction) or may be suddenly very unwell (when the obstruction is complete). Owners may notice a reduction in appetite, vomiting, diarrhea or constipation and a general lethargy. When the blockage is complete, these symptoms will come on quickly and will be very severe. Cats may have a painful abdomen and will not want to eat at all. They can become quickly dehydrated and require an emergency appointment.

Vets will suspect a blockage after checking the cat over and can diagnose intestinal impactions with imaging, either with abdominal X-rays or ultrasounds. The hair ball may not show up very obviously, but the vet will likely be able to tell that there is a blockage due to the swollen guts and gas patterns.

While sometimes these blockages can be moved along with intensive fluid therapy and laxatives, some unlucky felines will actually need invasive surgery to cure them. Any surgery that involves cutting in to the intestine is a risky one and cats will take several weeks to recover. Luckily, this is an extremely rare occurrence and not something that cat owners should spend their time worrying about.

Ideally, we want to reduce hairballs as much as is possible, to avoid these serious complications. Before being able to prevent them, we need to understand how and why they form.

Most will be aware that the longer-haired and the more densely-furred the cat, the more at risk they are for developing fur balls. The truth is though, that absolutely any breed can develop them and it is not unusual for a Domestic Short Hair cats to bring up a hairball every now and then. In fact, short-haired cats can lose fur at a quicker rate than their longer-furred counterparts, so may sometimes be more afflicted!

We tend to see hairballs in adult cats rather than kittens and youngsters as cats get better at grooming as they mature, and inevitably consume more fur. Owners of breeds such as Persians, Norwegian Forests and Maine Coons will be more familiar with fur balls and may already have lots of experience in the matter.

Cats are incredibly clean animals. The average cat will spend a whopping 15 to 50 percent of their day grooming themselves; licking their fur intently, spreading the natural oils along the fur shafts and removing any tangles. While their anatomy is designed for this, with their tongue containing small, backwards-facing barbs, sometimes the amount of fur they are confronted with is just too much for them to deal with. This is especially the case when a cat is over-grooming. Some cats will lick themselves until their skin is red-raw and bald, ingesting a tonne of fur in the process. This behavior can be linked to medical issues such as allergies and parasite infestations, as well as primary behavioral issues such as anxiety and depression. The sheer 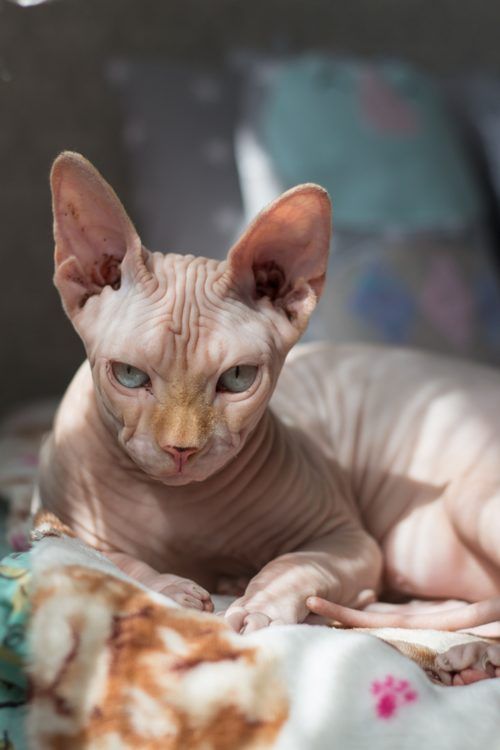 amount of fur that is being consumed is too much for the body to cope with effectively, hence hairballs are produced more regularly.

Interestingly, even hairless cats such as Sphynxes like to ingest fur and there have been cases of completely bald cats developing hairballs after spending all of their time grooming the other, furrier cat in the home! While a hairball may not be something you would be expecting a Sphynx to

produce, vets all around the world can attest that cats sure do love to surprise us however they can.

Some owners are uncertain whether their cat is actually producing hairballs as they are unsure of the associated symptoms. In fact, it is not unheard-of for an owner to present to the veterinary clinic concerned that their cats have asthma or bronchitis, only to be told that they actually have a classic case of hairballs! While it is true that a cat will vomit a hairball rather than cough one up, the sounds they make can sound very much like a dry, hacking cough, so it easy to see how this mistake can be made. If cats are gagging and making coughing noises frequently and are then swallowing the hairball or vomiting it up in secret, owners can become understandably confused. Sometimes, it is useful for an owner to take a video of the ‘retching’ event so a vet can cast their expert eye over it and figure out what exactly is going on.

Of course, sometimes the converse is true. Owners are nonchalant about their cat’s chronic cough, convinced it is just some ‘good ole hairballs’. In those cases, the coughing episodes are often frequent and severe and hairballs are rarely or never produced. When confronted with this type of situation, vets will typically want to perform some diagnostic tests, such as chest X-rays, to find out what is really going on.

Similarly, many owners will blame hairballs for what is in fact a true gastrointestinal upset and think that their cat who has been vomiting bile and food on and off is riddled with hairballs. It is much more likely that these cats are suffering with a chronic disease such as Inflammatory Bowel Disease or a food allergy, so it’s important not to dismiss every vomit as a fur ball. Those with hairballs should not lose weight, have appetite changes, develop diarrhea or exhibit any other symptoms of being unwell.

The odd hairball now and then is a normal part of a cat’s life and there is nothing that we can do to completely rid our felines of hairball; they simply come with the territory of being a cat. The issue arises when hairballs are becoming too frequent or are causing intestinal issues. In those cases, we need to address the issue and start to do things to reduce their incidence. Our next article in the series focuses on how to treat and prevent hairballs in our beloved cats.

Photo by Lynn Elder from Pexels

Photo by наталья семенкова from Pexels