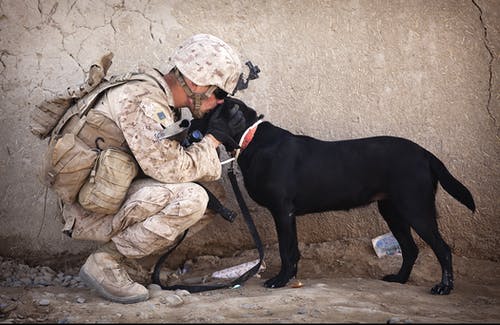 I thought you might find this interesting.  No surprises.  At least the military is trying to deal with it in some way.

SAN ANTONIO  The call came into the behavior specialists here from a doctor in Afghanistan. His patient had just been through a firefight and now was cowering under a cot, refusing to come out.

If anyone needed evidence of the frontline role played by dogs in war these days, here is the latest: the four-legged, wet-nosed troops used to sniff out mines, track down enemy fighters and clear buildings are struggling with the mental strains of combat nearly as much as their human counterparts.

By some estimates, more than 5 percent of the approximately 650 military dogs deployed by American combat forces are developing canine PTSD. Of those, about half are likely to be retired from service, Dr. Burghardt said.

Though veterinarians have long diagnosed behavioral problems in animals, the concept of canine PTSD is only about 18 months old, and still being debated. But it has gained vogue among military veterinarians, who have been seeing patterns of troubling behavior among dogs exposed to explosions, gunfire and other combat-related violence in Iraq and Afghanistan.

Like humans with the analogous disorder, different dogs show different symptoms. Some become hyper-vigilant. Others avoid buildings or work areas that they had previously been comfortable in. Some undergo sharp changes in temperament, becoming unusually aggressive with their handlers, or clingy and timid. Most crucially, many stop doing the tasks they were trained to perform.

If the dog is trained to find improvised explosives and it looks like it’s working, but isn’t, it’s not just the dog that’s at risk, Dr. Burghardt said. This is a human health issue as well.

That the military is taking a serious interest in canine PTSD underscores the importance of working dogs in the current wars. Once used primarily as furry sentries, military dogs  most are German shepherds, followed by Belgian Malinois and Labrador retrievers  have branched out into an array of specialized tasks.

They are widely considered the most effective tools for detecting the improvised explosive devices, or I.E.D.’s, frequently used in Afghanistan. Typically made from fertilizer and chemicals, and containing little or no metal, those buried bombs can be nearly impossible to find with standard mine-sweeping instruments. In the past three years, I.E.D.’s have become the major cause of casualties in Afghanistan.

The Marine Corps also has begun using specially trained dogs to track Taliban fighters and bomb-makers. And Special Operations commandos train their own dogs to accompany elite teams on secret missions like the Navy SEAL raid that led to the killing of Osama bin Laden in Pakistan. Across all the forces, more than 50 military dogs have been killed since 2005.

The number of working dogs on active duty has risen to 2,700, from 1,800 in 2001, and the training school headquartered here at Lackland has gotten busy, preparing about 500 dogs a year. So has the Holland hospital, the Pentagon’s canine version of Walter Reed Army Medical Center.

Dr. Burghardt, a lanky 59-year-old who retired last year from the Air Force as a colonel, rarely sees his PTSD patients in the flesh. Consultations with veterinarians in the field are generally done by phone, e-mail or Skype, and often involve video documentation.

In a series of videos that Dr. Burghardt uses to train veterinarians to spot canine PTSD, one shepherd barks wildly at the sound of gunfire that it had once tolerated in silence. Another can be seen confidently inspecting the interior of cars but then refusing to go inside a bus or a building. Another sits listlessly on a barrier wall, then after finally responding to its handler’s summons, runs away from a group of Afghan soldiers.

In each case, Dr. Burghardt theorizes, the dogs were using an object, vehicle or person as a cue for some violence they had witnessed. If you want to put doggy thoughts into their heads, he said, the dog is thinking: when I see this kind of individual, things go boom, and I’m distressed.

Treatment can be tricky. Since the patient cannot explain what is wrong, veterinarians and handlers must make educated guesses about the traumatizing events. Care can be as simple as taking a dog off patrol and giving it lots of exercise, playtime and gentle obedience training.

More serious cases will receive what Dr. Burghardt calls desensitization counter-conditioning, which entails exposing the dog at a safe distance to a sight or sound that might set off a reaction a gunshot, a loud bang or a vehicle, for instance. If the dog does not react, it is rewarded, and the trigger the spider in a glass box, Dr. Burghardt calls it is moved progressively closer.

Gina, a shepherd with PTSD who was the subject of news articles last year, was successfully treated with desensitization and has been cleared to deploy again, said Tech. Sgt. Amanda Callahan, a spokeswoman at Peterson Air Force Base in Colorado.

Some dogs are also treated with the same medications used to fight panic attacks in humans. Dr. Burghardt asserts that medications seem particularly effective when administered soon after traumatizing events. The Labrador retriever that cowered under a cot after a firefight, for instance, was given Xanax, an anti-anxiety drug, and within days was working well again.

Dogs that do not recover quickly are returned to their home bases for longer-term treatment. But if they continue to show symptoms after three months, they are usually retired or transferred to different duties, Dr. Burghardt said.

As with humans, there is much debate about treatment, with little research yet to guide veterinarians. Lee Charles Kelley, a dog trainer who writes a blog for Psychology Today called My Puppy, My Self, says medications should be used only as a stopgap.We don’t even know how they work in people, he said.

In the civilian dog world, a growing number of animal behaviorists seem to be endorsing the concept of canine PTSD, saying it also affects household pets who experience car accidents and even less traumatic events.

Dr. Nicholas H. Dodman, director of the animal behavior clinic at the Cummings School of Veterinary Medicine at Tufts University, said he had written about and treated dogs with PTSD-like symptoms for years  but did not call it PTSD until recently. Asked if the disorder could be cured, Dr. Dodman said probably not.

It is more management, he said. Dogs never forget. 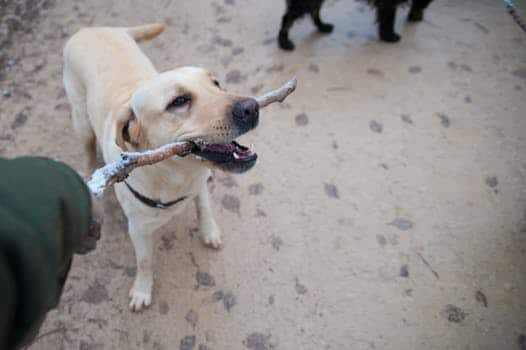 Something Dog Lovers Would Understand (video)

Have you seen this video?  This dog waited outside of the hospital for 8 days while his owner was receiving treatment and this is what happened when the two were reunited!   It reminds me of how loving dogs are…   You may also enjoy these posts; 3 Love Lessons From Your Animals by Val […]
Learn More 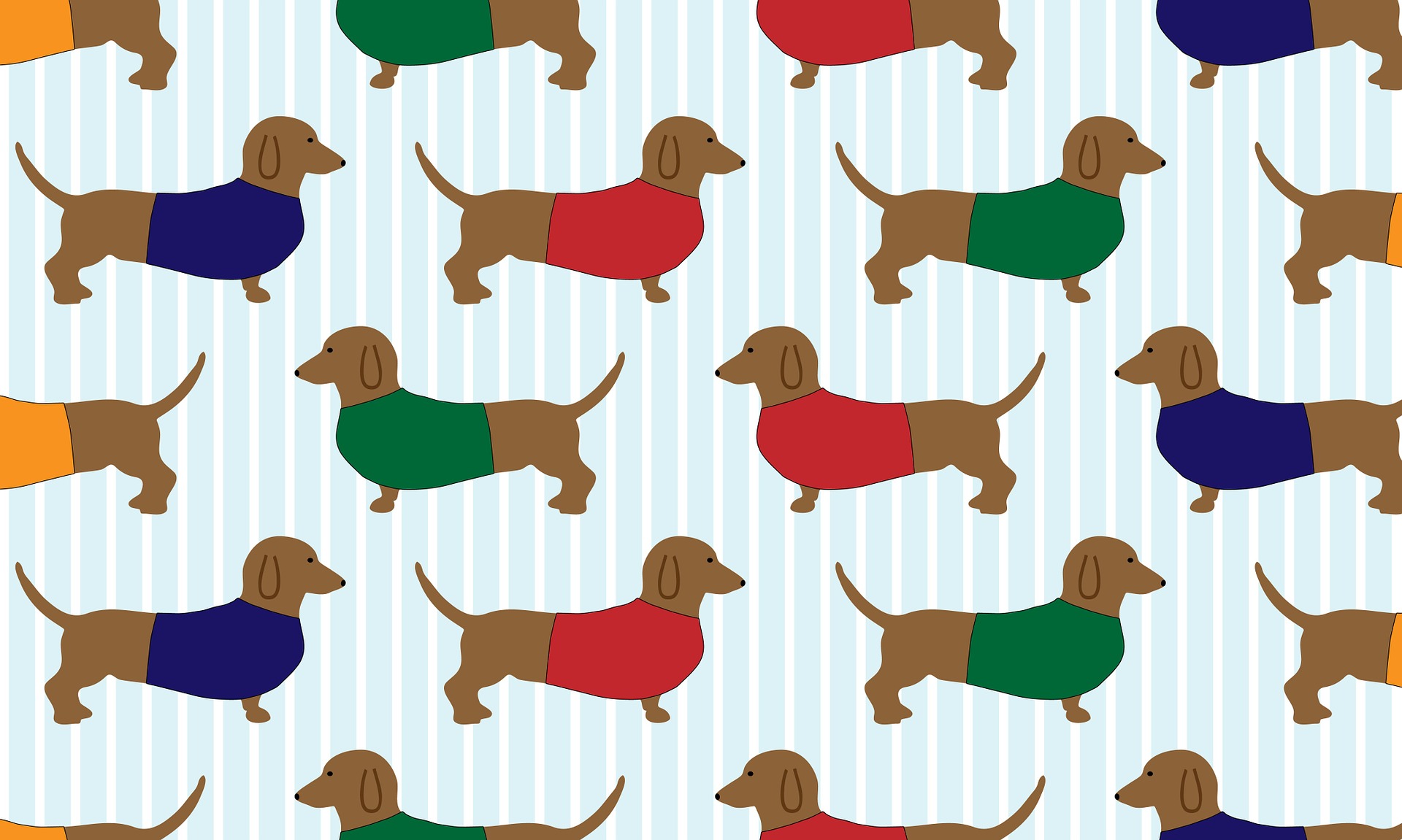 Inspired Dog Sweaters for Parents Who Want to Spoil Their Dogs

The designers at http://myknitt.com certainly love dogs. Their passion and creativity leads them to come up with inspired designs for handmade crochet dog clothes. They specialize in dog sweaters. There are many of us dog lovers who treat their dogs like their children. I’m certainly guilty of this myself. I love to spoil Einstein. I […]
Learn More

Pet-proof Your Home; It’s Easy if You Follow These 6 Steps

Are you bringing home a new pet? Or, have you been asked to take care of someone else’s pet? Either way, it’s a big responsibility.  Pets – like humans – are curious by nature. They find trouble in some unexpected places…and anxious pets? They can do some serious damage to their environment, you and your […]
Learn More